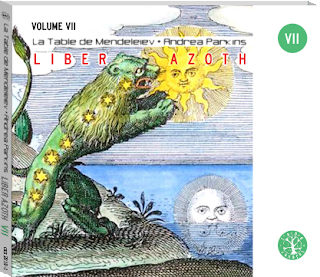 Guillaume Grenard and his band "la Table de Mendeleïev" (LTDM) recorded their seventh opus with Andrea Parkins, accordeonist of the experimental scene of New York City. The album is called Liber Azoth in reference to the book of Paracelsus, famous alchimist from the german renaissance16th century. 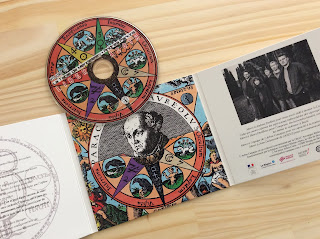 Since the beginning of LTDM discography, I had the great honor to be in charge of the cover design. And, according to the graphic guideline of the collection, the visuals are drawn by the symbols and enigmatic engravings of the alchimists books. 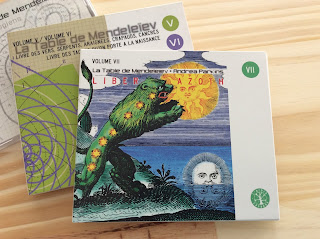 Thus, this seventh volume uses the symbol of the green lion flanked by seven stars devouring the sun, who opens and closes the indissoluble seals of the seven mettalic spirits. All the compositions are inspired by the elements of the famous periodic table and the composer already announced me that the next volume would be the last of the project and should be recorded in live. We also evoqued the eventuality of live painting on stage during the concerts. To be continued…

This blog presents the part of my work that can't be stored in the "children books illustration" category. Sketchbooks, watercolors, exhibitions, signatures, workshops, relief printmaking (especially japanese "moku hanga" woodblock prints), graphic design…
Click on the tags listed below and enjoy your visit.